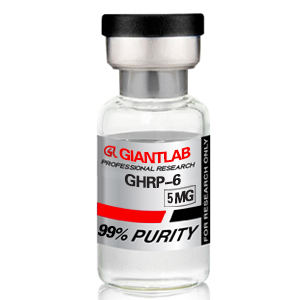 GHRP-6 is one of several synthetic met-enkephalin analogues that include unnatural D-amino acids, were developed for their growth hormone-releasing activity and are called growth hormone secretagogues.

It acts directly on pituitary somatotrophs to stimulate GH release. Its main use is to promote food intake by stimulating hunger and aid in energy metabolism.

Where GHRP-6 could do some help?

After used GHRP-6, you will feel very hungry. Thus, it will do help for these guys who have eating disorders. And GHRP-6 will stimulate your pituitary somatotrophs to release more GH, so it can be used in the treatment of GH deficiency as well as cachexia. GH is a very important hormone， which will be beneficial to anabolism, help you lose weight (cure obesity) and do great help in recovery and possible anti-aging purposes. Appropriate-dosed and cycled GHRP use may at least partially provide such benefits, particularly with regard to anti-inflammatory and healing effect.

GHRP-6 side effects that are the result of the HGH increases include: flu-like symptoms, joint pain, and carpal tunnel syndrome, headaches, and bloating and water retention.

Extreme hunger stimulation: almost all GHRPs will stimulate hunger simply by virtue of the fact that they are Ghrelin mimetics (they mimic the action of the hormone Ghrelin in the body), but GHRP-6 has demonstrated both anecdotally as well as clinically to stimulate the largest hunger increases in comparison to all other GHRPs.

Lactating nipples: the increase of Prolactin secretion can result in lactation from the nipples. However, this is a rare occurrence but it can happen in sensitive individuals. GHRP-6 exhibits the ability to induce secretion of Cortisol and Prolactin, but studies have shown that the Prolactin and Cortisol increases in most test subjects were not altered at all at GHRP-6 doses of 100mcg or less.

Light-headedness and dizziness: many users reported that after used GHRP-6, usually, they will get a “head rush” feeling accompanied by a tingling and “pins and needles” feeling in the extremities.

How to store GHRP-6?

This lyophilized powder is stable at room temperature when garded from light, but should be kept at -20°C for long term storage, preferably with dessicant. Upon reconstitution, stable storage temperature is 2-8°C. (It is acceptable however for them to be mailed unrefrig