PT-141 is a metabolite of Melanotan 2

PT-141 or Bremelanotide is the generic term for a research peptide being studied for its possible use in helping to improve sexual dysfunction.PT-141 was developed from the tanning peptide Melanotan 2,which is a synthetically produced variant of a peptide hormone naturally produced in the body that stimulates melanogenesis that is known as alpha-Melanocyte stimulating hormone.MSH,activates certain melanocortin receptors in the process of exerting its effects.Indeed,MSH also exerts potent influence over lipid metabolism,appetite,and sexual libido.Resultantly,PT-141 has been shown in studies to exhibit libido-enhancing effects by activating the melanocortin receptors MC1R and MC4R, but not skin tanning.In addition,Melanotan 1 and Melanotan 2 have been researched for their use in protecting against the harmful effects of ultraviolet radiation from sunlight due to their melanogenesis-stimulating properties.

The Development of PT-141

PT-141 was developed from the Melanotan 2 Peptide,which underwent testing as a sunless tanning agent.In initial testing,Melanotan 2 did induce tanning, but additionally caused sexual arousal and spontaneous erections as unexpected side effects in nine out of the ten original male volunteer test subjects.Palatin completed patient treatment in its Phase 2B clinical trial in premenopausal women with FSD Primary data analysis and announcement of top-line results anticipated in first-half of fourth quarter of calendar year 2012.In studies,PT-141 was shown to be effective in treating sexual dysfunction in both men (erectile dysfunction or impotence) and women (sexual arousal disorder).Unlike Viagra and other related medications, it does not act upon the vascular system,but directly increases sexual desire via the nervous system. 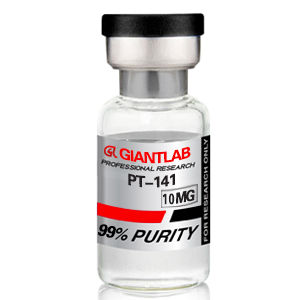 We recommend that this vial be briefly centrifuged prior to opening to settle the contents to the bottom. Reconstitute in sterile distilled water or aqueous buffer containing 0.1% BSA to a concentration of 0.1-1.0 mg/mL. Stock solutions should be apportioned into working aliquots and stored at < -20°C. Further dilutions should be made in appropriate buffered solutions.