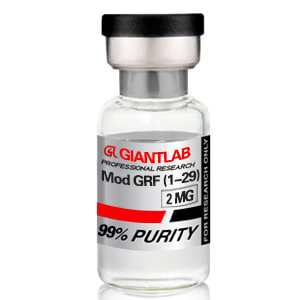 Originally known as tetrasubstitued GRF (1-29), Modified GRF (1-29) often abbreviated as Mod GRF (1-29), another more general name as CJC-1295 no dac, is a term used to identify a 29 amino acid peptide analogue of growth-hormone-releasing hormone (GHRH). CJC-1295 is a synthetic modification of growth hormone releasing factor. This is a growth hormone known as a long acting hormone, which can remain in the subject for up to a week. Mod grf (1-29) is a modified version of the shortest fully functional fragment of GHRH, often referred to as growth hormone releasing factor (1-29) (abbreviated as GRF (1-29)), and also known by its standardized name, sermorelin.

The first 29 amino acids of GHRH were discovered to be as equally potent as its full 44 amino acid structure. This fragment became known as GRF (1-29). However, due to a rapid metabolic clearance analogues of GRF (1-29) were synthesized to enhance the biological activity and reduce the rapidity of metabolic clearance. These analogues were primarily created by substituting amino acids within the peptide structure for amino acids more resistant to enzymatic cleavage. In 2005, the first specific mention of tetrasubstitued GRF (1-29) appeared in a study that used it as one of the GRF (1-29) analogue peptide structures studied. In 2008, a researcher known as DatBtrue created the term modified GRF (1-29) in place of tetrasubstitued GRF (1-29) in his public articles. Continued use of the term on public and private forums has popularized and standardized the nomenclature.

It is well proven as a GHRH replacement in animals and humans and works as an injection or intranasally, thus Mod GRF 1-29 (CJC-1295 NO DAC) has the same effects as GHRP. These effects mainly include such as: accelerated wound healing, improved bone growth, good for muscle growth(hypertrophy), accelerated metabolism, and enhanced fat burning. Moreover, according to a large number of experimental studies, Mod GRF 1-29 also has positive effects on the immune system and blood sugar regulation.

During normal pulsatile secretion patterns, Mod GRF 1-29 stimulates the pituitary gland to significantly increase output of growth hormone . The magnitude of its effects are comparable to exogenous HGH administration, and as such when used over long periods of time can be suppressive to natural production. It is sometimes combined with a potent GHRP such as GHRP-6 which stimulates a massive release of ghrelin, in turn amplifying the magnitude of growth hormone release from the pituitary. It is worth mentioning that, Mod GRF 1-29 is also much safer than exogenous HGH administration and much more cost-effective over the long haul. Effects of Mod GRF 1-29 are synonymous with human growth hormone, with the exception that it is amplified several-fold. It promotes a state of positive nitrogen balance, increases lipolytic activity, and supports structural regeneration and recovery of connective soft tissue types.

Giant Lab is offering the purest SARMs and Peptides sourced and made in the United States. Buy  cjc-1295 no dac 2mg peptide at Giant Lab for the best price and quality. Contact person: vince@giantlab.net