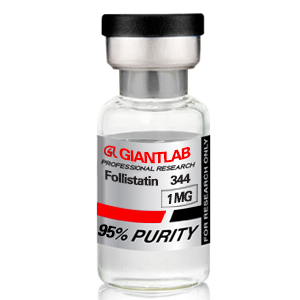 Follistatin is also known as activin-binding protein. It is a protein that in humans encoded by the FST gene. Follistatin (FST) is a secreted glycoprotein that was first identified as a follicle­stimulating hormone inhibiting substance in ovarian follicular fluid. Specifically, human Follistatin cDNA encodes a 344 amino acid (aa) protein with a 29 aa signal sequence, an N­terminal atypical TGF binding domain, three Follistatin domains that contain EGF­like and kazal­like motifs, and a highly acidic C­terminal tail. Moreover, Follistatin is a secreted protein that binds to ligands of the TGF-Beta family and regulates their activity by inhibiting their access to signaling receptors. It was originally discovered as activin antagonists whose activity suppresses expression and secretion of the pituitary hormone FSH (follicle stimulating hormone). In addition to being a natural antagonist, follistatin can inhibit the activity of other TGF-Beta ligands including BMP-2,-4,-6,-7, Myostatin, GDF-11, and TGF-Beta1. Follistatin is expressed in the pituitary, ovaries, decidual cells of the endometrium, and in some other tissues. Recombinant human Follistatin is a 37.8 kDa protein containing 344 amino acids.

Follistatin-344 is being studied for its role in regulation of muscle growth in mice, as an antagonist to myostatin (also known as GDF-8, a TGF superfamily member) which inhibits excessive muscle growth. Lee & McPherron demonstrated that inhibition of GDF-8, either by genetic elimination (knockout mice) or by increasing the amount of follistatin, resulted in greatly increased muscle mass.

A study has also shown that increased levels of follistatin, by leading to increased muscle mass of certain core muscular groups, can increase life expectancy in cases of spinal muscular atrophy (SMA) in animal models. It is also being investigated for its involvement in polycystic ovary syndrome (PCOS), though there is debate as to its direct role in this infertility disease.

Some groups have also reported results suggesting roles for follistatin and/or its derivatives in inflammatory processes, scar tissue formation, hair growth and tissue re-modeling. The anti-inflammatory effects of Follistatin are most likely to be due to its binding of activin, which has been shown to be released in response to animal models of immune-system challenge. Follistatin may also reduce mortality in these animals, due to the neutralization of activin and, thus, increased inflammation. However, activin may also promote tissue remodeling. Therefore, follistatin may be used to selectively modulate tissue regeneration, leading to the improved control of wound healing and fibrosis in animals affected by disorders of the relevant processes. Few formal studies have been conducted to elucidate the pharmacokinetics or pharmacodynamics of FS-344. However, a study the same of of the splice-variant FS-315 suggest that follistatin exhibits rapid clearance and limited distribution.