Mechano Growth Factor is commonly referred to as MGF in laboratories as well as the internet. You can purchase a USA made peptide in its purest form Giant Lab online store. Produced from above 99% pure raw powder, Mechano Growth Factor is top quality sold by Giant Lab. Giant Lab is a famous and with more than 5 years experience of peptides promotion legit-able company. With headquarter based in USA, New York, Giant Lab guarantee shipping for every single order.  Mechano growth factor (MGF) is a splice variant of insulin‐like growth factor that possesses anabolic properties and has not yet been approved for therapeutic use. 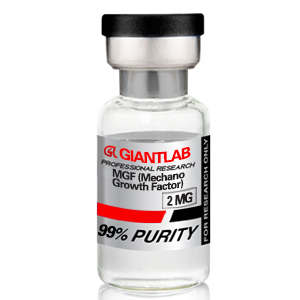 Although the nomenclature surrounding MGF is problematic, a number of studies have been published that attempt to define the role of IGF-IEb/MGF in muscle repair and survival. In aggregate, results from these studies have led to the formation of what we term the MGF hypothesis. The MGF hypothesis asserts that during acute skeletal muscle repair after exercise or injury, levels of a specific splice variant that contains exon 5 (IGF-IEb in rodents, Ec in humans; increase above preinjury levels. After several days, levels of this transcript decrease, and levels of the IGF-IEa splice variant increase above their preinjury levels concomitant with the decline in levels of IGF-IEb mRNA.

Over the past 10 years, literature has arisen asserting that an alternative splicing event in the IGF-I gene occurs very early in skeletal muscle in response to mechanical stimuli such as tenectomy and electrical stimulation. This splicing event is posited to result in production of an IGF-I mRNA species that is translated into a precursor and subsequently processed to generate a peptide distinct from the canonical 70-amino-acid mature IGF-I peptide. The unique peptide derived from the pro-IGF-I precursor has been named mechano-growth factor, or MGF. Many data have been generated indicating that a synthetic version of this peptide may increase precursor cell proliferation. Moreover, researchers proposed that there is insufficient data providing proof of principle that this peptide is generated in vivo or to possess a novel role in activation and proliferation of progenitor cells during the initial phases of repair after tissue injury. Because the existence and action of MGF depends on certain features of the Igf1 gene and transcription unit, we will begin by reviewing the structure of the Igf1 gene and its expression products

The discovery that IGF-I mRNAs encoding isoforms of the pro-IGF-I molecule are differentially regulated in response to mechanical stress in skeletal muscle has been the impetus for a number of studies designed to demonstrate that alternative splicing of IGF-I pre-mRNA involving exons 4, 5, and 6 gives rise to a unique peptide derived from pro-IGF-I that plays a novel role in myoblast proliferation. Research suggests that after injury to skeletal muscle, the IGF-IEb mRNA splice variant is up-regulated initially, followed by up-regulation of the IGF-IEa splice variant at later time points. Up-regulation of IGF-IEb mRNA correlates with markers of satellite cell and myoblast proliferation, whereas up-regulation of IGF-IEa mRNA is correlated with differentiation to mature myofibers. Due to the apparent role of IGF-IEb up-regulation in muscle remodeling, IGF-IEb mRNA was also named mechano-growth factor (MGF). A synthetically manufactured peptide (also termed MGF) corresponding to the 24 most C-terminal residues of IGF-IEb has been shown to promote cellular proliferation and survival.

The role of E-peptides in muscle repair and neuronal protection has also been the focus of intense study. Early work indicated that muscles exposed to stretch and (or) electrical stimulation responded with increased levels of the IGF-IEb mRNA splice variant. Because increases in IGF-IEb mRNA were seen after mechanical damage, and owing to its expression in a mechano-sensitive manner, IGF-IEb mRNA was named mechano-growth factor (MGF). Although the term MGF signifies its responsiveness after mechanical stress, it is nonetheless the exact same mRNA species as IGF-IEb and does not differ in sequence from IGF-IEb mRNA found in multiple tissues (23). The idea that the IGF-IEb transcript required a second name, i.e. MGF, resulted not only from findings that this splice variant is increased after mechanical stress but also from the opinion that species-specific designations for IGF-I splice variants could be simplified.